Magnetic pencils with the CERN logo. 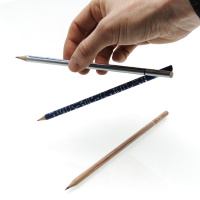 Made in Switzerland & France in 3 different colors :