Although we live in an era of PowerPoint, smartboards and digital projection, the traditional blackboard still retains an allure and usefulness for physicists that more advanced technologies can’t match.

The official CERN website is a good starting point for discovering more about CERN, particle physics, technology and education.

Lagrangian of the Standard Model of particle physics

This formula is the mathematical representation of the Standard Model of particle physics, the theory that describes the elementary particles and the forces that bind them together. The first line describes the forces: electricity, magnetism, the strong nuclear force and the weak nuclear force. The second line shows how these forces act on the elementary particles of matter. The last two lines describe the Higgs boson and the mechanism by which particles acquire their mass. 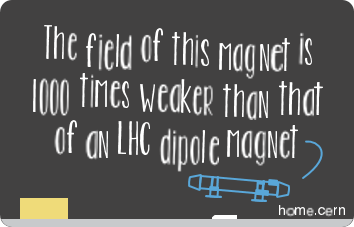 All the magnets in the LHC are electromagnets. The main dipoles generate powerful 8.3 tesla magnetic fields – more than 100,000 times more powerful than the Earth’s magnetic field.

This fridge is 150 times hotter than an LHC dipole magnet

The Large Hadron Collider (LHC) is the largest cryogenic system in the world and one of the coldest places on Earth. All of the magnets in the LHC are electromagnets – magnets in which the magnetic field is produced by the flow of electric current. The LHC's main magnets operate at a temperature of 1.9 K (-271.3°C), colder than the 2.7 K (-270.5°C) of outer space.

More about cryogenics in the LHC